I can’t believe it! For the first time in I think 10 years, we do not have a boy in Cub Scouts. When I heard the announcement for the upcoming Blue & Gold Banquet on the day it was happening, I wondered why I was only hearing about it on the day it was happening. Kevin reminded me that we wouldn’t be attending this year, so why would we need to know about it? How weird!

Next came the Pinwood Derby announcements. While I am glad to miss the last minute frantic designing/cutting/painting of the car that Kevin and whatever boy/boys were doing it that year, I know they had fun together doing it.

Our “claim to fame” for our 4 boys was ever-trying-but-not-succeeding-at-winning-lots-of-races! We actually kind of made a joke out of it rather than get discouraged each year. Our final year (last year) Peanut had the cutest car ever. Here he is. His name is “Tuh”. 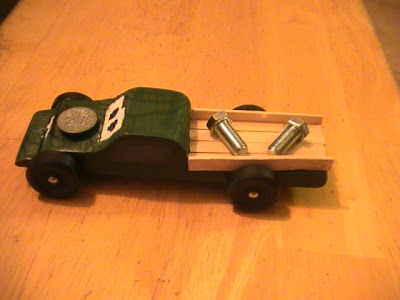 He is “Mater’s” cousin. (Familiar with the movie Cars?) 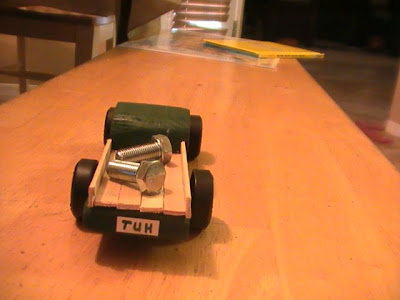 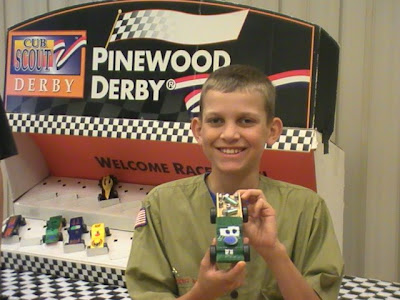 After a couple of losing rounds, a minor adjustment was made and Tuh started winning and winning. Too bad the first rounds counted, or he probably could have placed. Oh well, such is life. In 7 years, Kevin & Chubby can have a go at Pinewood Derbying. Perhaps we can break our streak then. 🙂
Did you do your Fit for 5 yet today?